How Ben got into OKRs Coaching

The OKRs Fieldbook is slated for publication in 2020. In the meantime, here’s another preview. If you are an OKRs coach or interested in exploring a career with OKRs.com as a full-time OKRs coach, please read my story and share yours with me!

As a twenty-something working on my doctoral degree in Management Science and Engineering at Stanford University, I completed my coursework and started searching for a research project. After realizing that I needed some work experience before doing research in an “applied field,” I opted to drop out of graduate school and get a job.  Nearly all my colleagues in my department at Stanford decided between just two fields, management consulting or investment banking. After accepting a position with a top management consulting firm, I sought approval from Dr. Michael Fehling, my academic advisor. I asked Michael, “Is it OK for me to take this job? Do you approve?” to which Michael replied, “As long as you have time for critical reflection, you’ll do great.”

As a management consultant, I averaged an 80-hour work week; there was no time to reflect.  I put in hours editing PowerPoint slides, setting up complex databases, and building macros in spreadsheets. I just kept doing whatever I was asked to do. While I developed solid job skills, I grew frustrated with the long hours.  After joining a dotcom and co-founding a software start-up that never quite took off, I started looking for a mentor. I needed the business-world equivalent of my old academic advisor, Michael Fehling. I needed someone to help me get back to critical reflection.

Jeff Walker introduced me to OKRs in 2010. Jeff was the founder of Oracle Applications and served as CFO during Oracle’s rapid growth in the late 1980s. Walker used OKRs at Oracle and taught me how to communicate by starting with the result rather than listing a bunch of projects we’re working on.  With Jeff’s guidance, I began working with the OKRs model in 2010 as VP Marketing at a start-up software company.

My first OKRs project with a client began with a request to “define and monitor Key Performance Indicators (KPIs) for dozens of departments across several business units.”  I ended up translating the strategy documents into the OKRs framework and presented this to the CEO and CFO.  They immediately requested that I create a similar document based on interviewing all 50 or so department heads.

While some of the teams had OKRs that looked a lot like the drivers in a financial model, many teams did not. The critical thinking that occurred during the OKRs coaching sessions with these 50 teams marked the turning point in my career. For the first time, I knew that I was engaged in a work activity that could change the game. Rather than asking questions in order to get data to populate a financial model for my boss, I was asking a different set of questions to mid-level managers. These questions were precisely the questions these managers needed to be asking themselves.

Questions like… 1: Why does our team exist? 2: What is the most important area for us to make measurable progress on in the near term? 3: How will we know we’ve achieved the objective?

These three fundamental “OKRs questions” are the same questions that Walker, my mentor, asked me when he introduced me to OKRs. They shook my world. They forced the same kind of critical reflection that Professor Fehling advocated back in my academic days. The seeds were planted, but I was not ready to take the plunge as a full-time OKRs coach. After leaving my start-up, I took a job at BetterWorks, an OKRs software company.

Working at BetterWorks was the big break I was looking for.  Shortly after I took the job, John Doerr agreed to invest roughly $12 Million, his largest A-Round since Google! My first two projects at BetterWorks focused on training our customers to define OKRs and load them into our software program. I took roughly two days with one client to train several teams and we had a few more teams to go.  As a software company with a big valuation, the expectation was more like train all teams in 2-4 hours rather than train half the teams in two days!

Apparently, I was more interested in helping organizations with their OKRs rather than implementing software, so I left BetterWorks and took on some freelance work. I had the foresight to buy this domain name, OKRs.com. I sensed I was heading in the right direction, but I had no income or business plan for developing a practice as an OKRs coach. It was difficult to track down clients looking for OKRs coaching. This was back in 2014 when there was pretty much zero demand for OKRs coaching. So, in order to sell OKRs coaching, I would first need to educate people about OKRs and then sell them on it. I knew from prior experiences this was not a good business model. At a loss, I turned back to Jeff Walker and had one of the most important conversations in my life.

Jeff asked me, “What is the one thing that meets the following three criteria: 1) you love to do it, 2) you can do it really well and 3) it has a major business value?”

Jeff: How many hours per week are you doing OKRs coaching?

Ben: Well, there’s no way to do that; my clients are paying me to do other stuff.

Jeff: Stop doing the other stuff and start focusing on OKRs coaching. Do it for free. Make it your goal to do as many sessions, free or paid, as possible. If you’re adding business value, people will start paying for it. This is how you get better while also testing out the market.

So, I took on the challenge and started offering free OKRs coaching to anyone who would give me an hour of their time. One memorable free coaching experience occurred with Wayne Eckerson, a business leader that I respected.  I wanted to get to know Wayne after reading several of his books on performance dashboards and Key Performance Indicators.  I incorporated quite a few of his ideas into my earlier consulting engagements.  Wayne kept needing to reschedule his free OKRs coaching session with me. Although it took me several months, I finally got him on the phone. We had blocked out an hour, but Wayne started by letting me know we had 30 minutes, 45 at most.

I started asking my basic OKRs questions to Wayne about his new business plan. The call surprised me. We were on for nearly three hours! I let Wayne know that we’d gone way over the hour and I needed to run.  Wayne ended the call with, “I forgot how valuable it is to take a step back and re-assess what I’m doing and why.”  This was just another data point that gave me the confidence to continue pursuing my path toward becoming a full-time OKRs coach. After completing 80 free sessions, people started approaching me for OKRs coaching. And, the rest is history. That’s how I became an OKRs coach. And, now you know why I inserted the words “critical thinking framework” when in my definition of OKRs. OKRs will ensure you make the time to critically reflect. So, Professor Fehling, if you’re listening, I am now taking the time to critically reflect. In fact, I’m helping others do the same. We’re following your advice. Thank you!

If you are an OKRs coach, please share the story of how you got started as a comment here!

Bonus: Want to contribute to the upcoming OKRs Fieldbook? If you are an OKRs coach and would like to share proven practices and tips from the field, please email me, [email protected]. 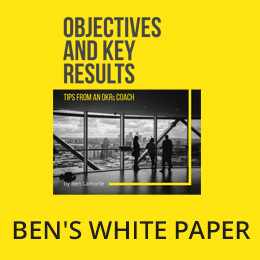